Pam Tempelmayr was born in Regina, Saskatchewan, Canada. Her father was a wildlife officer, who later became assistant Deputy Minister of Terrestrial Affairs in B.C.  By the time she was 16, Pam had lived in almost every region of Canada as well as a stint in northern Idaho.

Pam’s first trip into the wilderness was as an infant on her dad’s back. By the time she was ten years old, Pam was more comfortable in the wilderness than civilization. It was here in the wilds she learned the art of stillness, which she considers to be the source of her creativity.

Pam has spent her adult life on the West Coast, including many years on Vancouver Island and in Washington State. She now lives on Gabriola Island, British Columbia.

Pam is an avid hiker and gardener and spent 14 years as a syndicated garden writer. She was published throughout Canada and the United States.

“Nature and art are synonymous in my vocabulary. I believe Nature and her creations speak through me. My life has been spent acquiring the skills which now enable me to create the resulting visions.”

Pam has been painting professionally for fifty years. Her attention to detail is meticulous and each painting contains thousands of individual brush strokes.

Pam Tempelmayr’s work has been displayed in the U.S. and Canada and has been featured in some motion pictures filmed in the Northwest.

As well as different galleries, Pam was a regular participant in the Pacific Rim Art Exposition at the Seattle Exhibition Center. An eleven year sojourn in Poulsbo, Washington found Pam a contributor to the Bainbridge Arts Walk and a regular participant of the Art in the Woods Studio Tour on the Kitsap Penninsula where she is honoured to be on the City of Poulsbo’s Artists’ roster.

Her works hang in homes all over the world. Cards of the series are sold internationally and have been featured in many locations including the Art Gallery of Ontario.

She is now a regular participant in the Gabriola Studio Tour which she has been a part of since 2010.  Come visit Pam at Whalebone Studio this Thanksgiving!

A trip to Prince Edward Island on the Atlantic coast of Canada is where the Fish and Whale series began.  Lobster was being harvested by the millions and everywhere the cod had been fished to near extinction.  This became the inspiration for a unique series of watercolor paintings.

Historical and environmental tales are woven within each fish and whale, telling their stories in pictures.

Pam has been living on the west coast of B.C. and Washington since she was a teenager so it was natural that the fish and whales soon started representing this region as well, telling their own unique stories.

Since her trip to PEI, Pam has produced about 100 paintings in her current Fish and Whale series.  Most of these paintings are available as framed giclee prints. 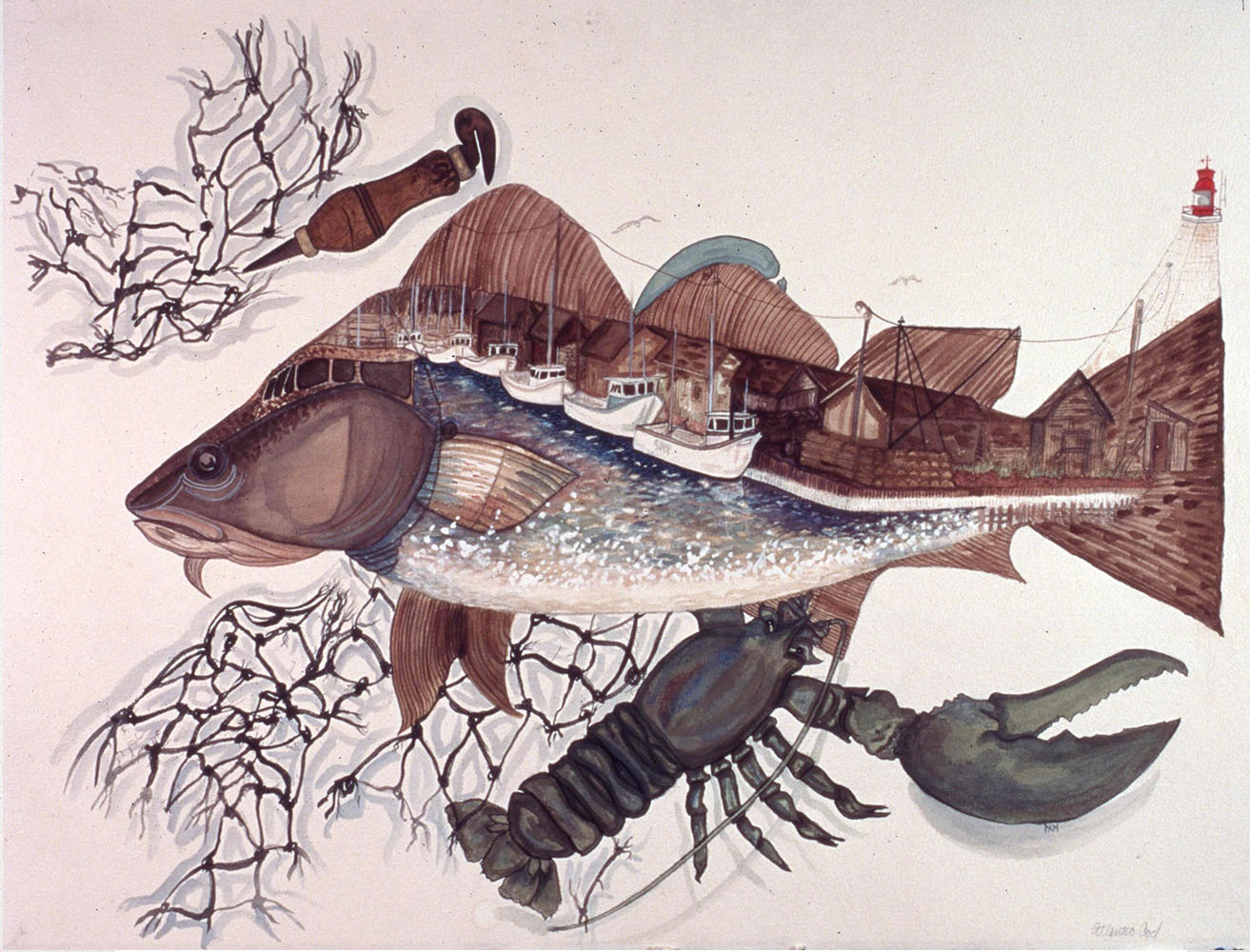